Creating a world of givers | The Times of India

The desire to make the world a better place is a noble one, but what’s nobler is to sustain such an inclination, and ensure it grows roots in as many people as possible — Trishya Screwvala’s ideals of altruism go something like this. The 31-year-old looks at volunteering as a powerful antidote against resignation in both the giver and receiver, and this is what she’ll talk at length about at the TEDxChennai 2018 to be held on Sunday at Sir Mutha Venkatasubbarao Hall in Chetpet.

Trishya is the founder of The Lighthouse Project, a Mumbai-based not-for-profit organisation that connects working professionals and college students with children from underresourced communities. She started it five years ago as an initiative to fill the gap among NGOs for “structured and sustained platforms for volunteering.”

“I feel that the younger generation is fairly socially conscious and enthusiastic about contributing in some way,” says Trishya. The Lighthouse Project currently has 500 volunteers working with it in Mumbai.

“One of our central objectives was to make volunteering cool, fun and accessible for those who wanted to do their bit, but weren’t sure how. At times, NGOs are aren’t able to spend time and resources training volunteers, because they feel they are here for a limited time. That’s where our mentoring programme for volunteers comes handy,” says Trishya.

So, if you have the fire to undertake a cause and create some value out of it, The Lighthouse Project allows you to sign up with it through an online application, followed by an interview, after which you are trained to mentor one child — based on your interest, location and gender.

Another void that led Trishya to start The Lighthouse Project was when she realised that the education system wasn’t always able to provide essential life and social skills to students from lower socio-economic backgrounds, after they passed out of schools and colleges. “This manifested in instances where these youngsters quit their jobs over not getting a day off for a festival or an altercation with the boss. Such decisions basically came from lack of confidence and an inability to manage emotions — which personalised guidance could have helped fix,” she says.

Trishya says her own impetus to get involved in the developmental sector was spurred by her film production background. She has produced several documentaries, including ‘Bollywood: The Greatest Love Story Ever Told’ that premiered at the 2011 Cannes Film Festival and Emmy-nominated ‘Meet the Patels’, winner of the 2014 Los Angeles Film Festival and Traverse Film Festival Audience Award. “It started when I was looking for projects to gauge the impact of films and documentaries on the social sector,” says Trishya.

Adding to her hunger to tangibly transform the way altruism is understood in the country is her involvement with New Acropolis, an international organisation of philosophy with branches in more than 50 countries.

“Volunteering pushes us to take a step outside of ourselves and become part of something vaster. In many ways it’s about daring to change yourself in a way you wish to change the world, and the ancient wisdom of world philosophy helps me practically do this,” says Trishya. To reserve your seats at TedX Chennai, log on to www.tedxchennai.in 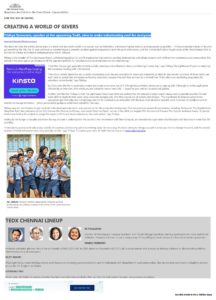